So, there I was, minding my own business and making a fair whack of trimming the grass when I thought I heard a familiar voice calling my name. 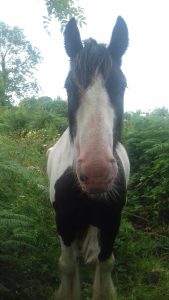 Sure enough, when I looked up, there was the lady with the White Head who used to sit on my back and give me treats and cuddles.

I ambled over and was delighted that she remembered exactly where I like to be scratched. I trained her well! She seemed happy to see me.

There was another lady there with a Yellow Head and they were both petting and scratching me, which was very nice. They were saying nice things about me too. I believe the word used by the Yellow Head lady was ‘perfect’. I can’t argue with that!

They left and I went back to my job of trimming the grass, but the next day they came back and asked me to get in a lorry. I’m an obliging fellow so, even though it seemed a bit strange, I walked up the ramp and off we went.

Before long, the ramp was lowered and in came Realtog – a gent of a pony if ever I met one! He’s old and wise and was able to fill me in on what was happening, so I kind of knew what to expect when we arrived at the Horses Connect base in Bushypark, close to Galway city. I was going to be a Therapist!

The rest of that day was spent getting my feet trimmed and my legs and tail washed. People were fussing over me like they already knew how important I am! 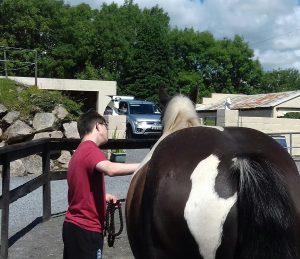 need to do to work as a Therapist with them.

I did a small bit of work on Saturday with a young man who was learning to lead. He was scared at first, and he thought I would step on him, but I’d never do that!

The big smile on his face when I walked and stopped and turned when he asked me was amazing!

I think I’m going to like being a Therapist!